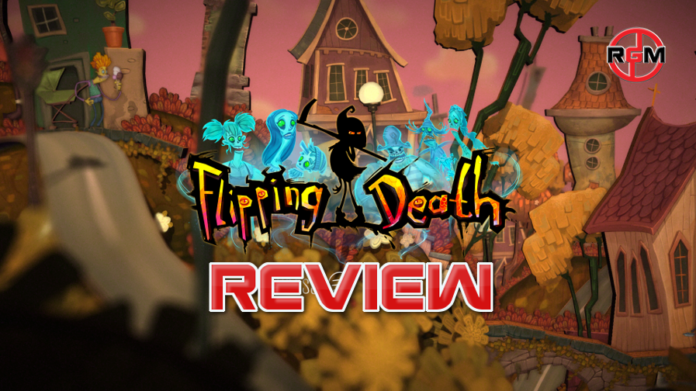 Games with a sense of humor are right up my alley, so when I was asked to review a game from Zoink Games, I was more than happy to oblige.

Most will be familiar with Zoink Games for Stick It To the Man, a puzzle-platformer with a beautiful paper-art style and a wicked sense of humor. Now comes Flipping Death, their newest offering with a similar art style that reminds me of vivid pop-up books from my childhood, except with a surprisingly entertaining grim twist.

I love a good puzzle full of platforming elements, so let’s see how Zoink have done at capturing my attention with their latest creation……..

Right from the word go Flipping Death is full of giggle worthy moments (and few of the cringe variety). You play as a young, and somewhat misguided, girl named Penny who has just gotten herself fired from yet another job. Keen to improve her evening she grabs her boyfriend Elliot and heads off for a night of food, movies and smooches. 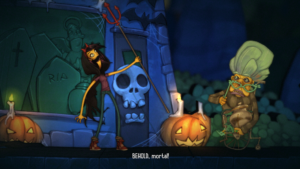 This is where you quickly get introduced to the main direction of the game. After coming to an untimely end, Penny finds herself standing in front of Death himself. Death, as it would turn out, is in dire need of a holiday, so much so that he instantly “mistakes” Penny for a temp he ordered some thousands of years ago, and promptly leaves Penny with his duties for the foreseeable future.

Now that you are in control you are given a brief, and I mean BRIEF, run down of what it is you are meant to do and how to do it, and you’re off!

Flatwood Peaks is home to your restless soul and that of many, many others, of which you are expected to help bring peace to their weary souls. 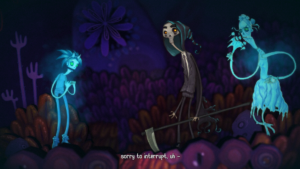 This is where you learn that you can “flip” between the world of the dead and the world of the living. By possessing the living, Penny flips into a vibrant world full or color and motion and can force the host to do as she pleases. Using the different host’ skills is how you then go about solving the puzzles.

As you go on your journey to figure out how you died, you collect more tasks assigned to you by the ghosts you encounter. It’s your job to help bring closure to these poor forsaken souls and through this the games’ mechanics reveal itself.

Once you get a handle on the basics, such as throwing your scythe and using it to teleport, and what can and can’t be interacted with, you then move onto trying to figure out how on earth you’re going to solve these puzzles. 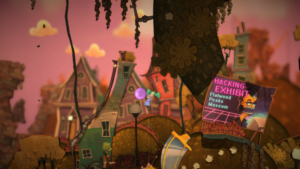 Taking a logical approach is right out the window, and instead a more comical twist has been added. One of the first puzzles you will need to solve is to paint the ship of a lingering soul with a tub of blue paint. Sounds simple enough right? Well, no. The paint can is out of reach so you have to work out which person in the land of the living to possess to get them to help you reach the paint can. Once you have achieved that you then need to work out how you’re going to open the can, then how you’re going to get the paint all the way back to the boat and actually paint it. All of these tasks sound simple enough but require you to possess multiple people, identify what their skill is, and then work out which one can help you with the next step of the puzzle.

Once you’ve solved your first puzzle though you are off and running after that, as now you actually have an idea of what you’re doing. 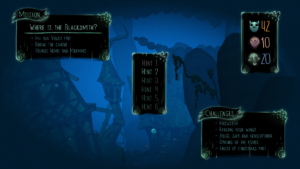 As I progressed along I found the puzzles to get more complex and even further left of field, however thankfully I noticed a “hints” section on the main menu and was able to resort to that when I had tried everything on my own and had failed. This is a great feature as the hint only gives you just enough info to lead you in the right direction, and not actually solve it for you, meaning that you can still get a sense of accomplishment from completing the puzzle. There were a few occasions though where I began to get very frustrated at not being able to work out what was next after seemingly possessing everyone on the map. Whilst the puzzles are fun, the left of field approach does seem to be a tad toooo far left of field every now and again.

Each “section” of the game is broken up into chapters, each with its own set of puzzles to solve, and bonus challenges, and it’s really important to have as good explore of the entire area, as failure to do so can leave you going around in circles wondering what you’re missing.

I am extremely pleased to say that in my MANY years of gaming, this is the very first time I have ever played a game pre-release and not encountered one single bug – well done Zoink, well done! That’s a sentence I sadly thought I would never type, so I can scratch that one off the bucket list.

I can’t praise the art style of Flipping Death enough. It’s fun, cheeky, a tad grotesque, and vibrantly alive, all at the same time. This game is simply a joy to look at. The paper-craft/pop-up book design works extremely well in this platforming puzzle based world. 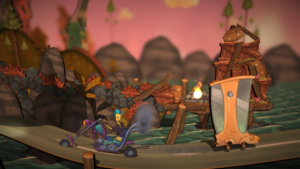 The two different colour schemes from the land of the living, to the land of the dead, complement each other nicely, with the quirkiness of the character design leaving you scratching your head and grinning at the same time.

The audio prompts are well placed to help remind you what functionality you have available at the time with fun sound effects attached to each character.

The narration can get a tad cheesy from time to time, but the game stays true to itself and isn’t afraid to poke a bit of fun at its own identity.

The background music is fun to begin with, but you will quickly get tired of it if you find yourself stuck in the one area unable to work out what to do next. A little more variety in that area couldn’t do any harm.