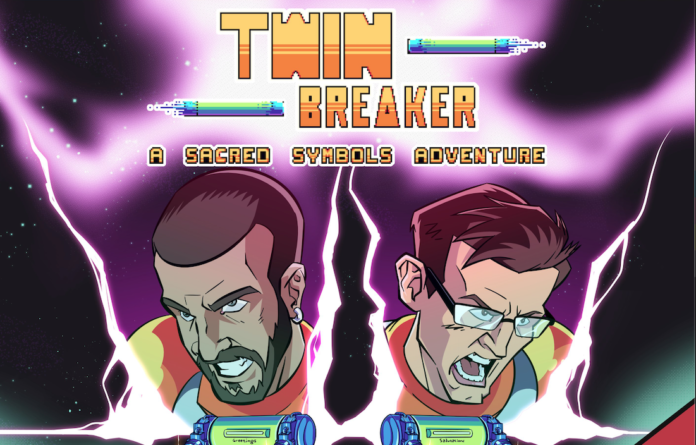 — A copy of the game was provided, courtesy of Lillymo Games —

Podcasts are an important part of my everyday life, listening to people like Marc Maron to Joe Rogan, from Jonathon Dornbush to Greg Miller. Colin Moriarty is also among this list, with his CLS series of podcasts (I’m a fan of Sacred Symbols). When he talked about his will to create video games, I was very curious. Further down the road, he mentioned he joined forces with Lillymo Games to create a block breaker game (in the spirits of Arkanoid) called Twin Breaker: A Sacred Symbols Adventure. I have always been a fan of this genre of game, so I wanted instantly to play it. Did it live up to my expectations? To my greatest pleasure, yes it did. 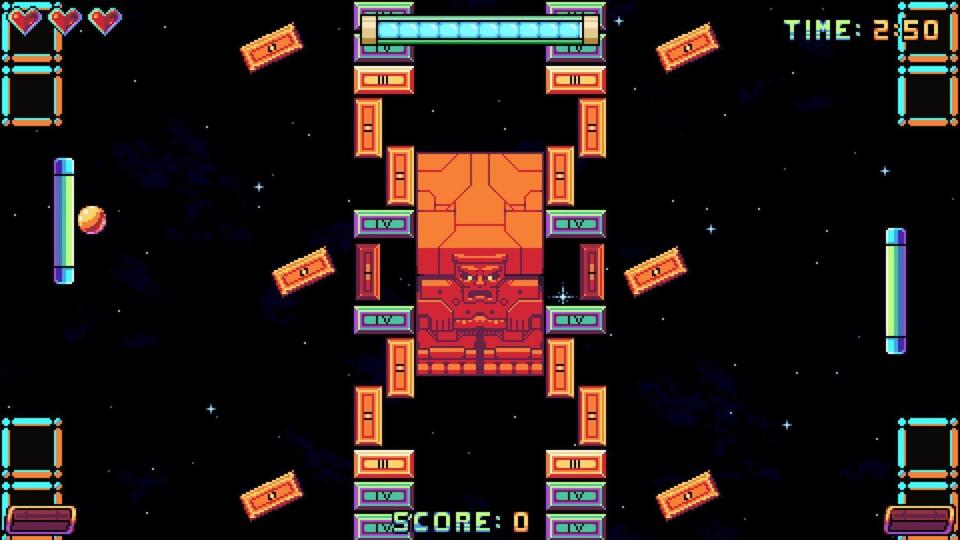 The gameplay rules behind a block breaker game is always the same. There is a ball that you need to move across the screen to break bricks, which takes 1-to-multiple hits to disappear. You move a pad, horizontally or vertically depending on the game, and you bounce the ball by making contact with it. To help you do so, you have power-ups that can randomly appear when you break a brick (like a pad extender, having laser guns firing on the brick for some time, etc.). There can also be obstacles that are more of a nuisance (like a pad shortener, having your ball go faster, etc.). All of those mechanics are part of Twin Breaker. 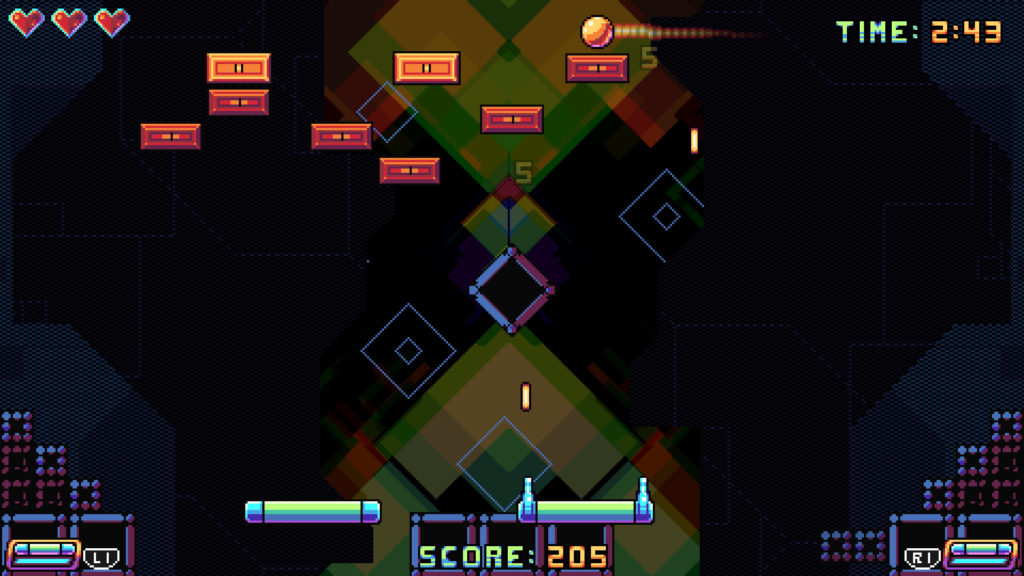 There are few twists in this game though. First of all, ball breaker games usually stick to one type of screen orientation. You play horizontally or vertically the entire game. Here, it is a pretty mixed bag. I didn’t count the exact amount of each type, but it’s almost an even split between the 2 types of screen layouts, and it made things very interesting. Everything is about patterns and comfort your brain feels while responding to the ball movement. By varying those 2 layouts, it keeps you on your toes all the time, making things a little more challenging.

The biggest twist though is this one: you actually control 2 pads at the same time! You control the one on the left with the left directional stick. You control the right one with the right stick. The pads can’t overlap each other, meaning that the left one cannot cross over the right section of the screen, and vice versa. It really forces you to take the time to learn how everything moves. When you have balls going fast bouncing on many bricks, you have to learn what to do when. This is really an aspect I haven’t seen in any other game of this genre. There is even an additional layer of difficulty that can be seen in some stages, but I’m not going to spoil it. 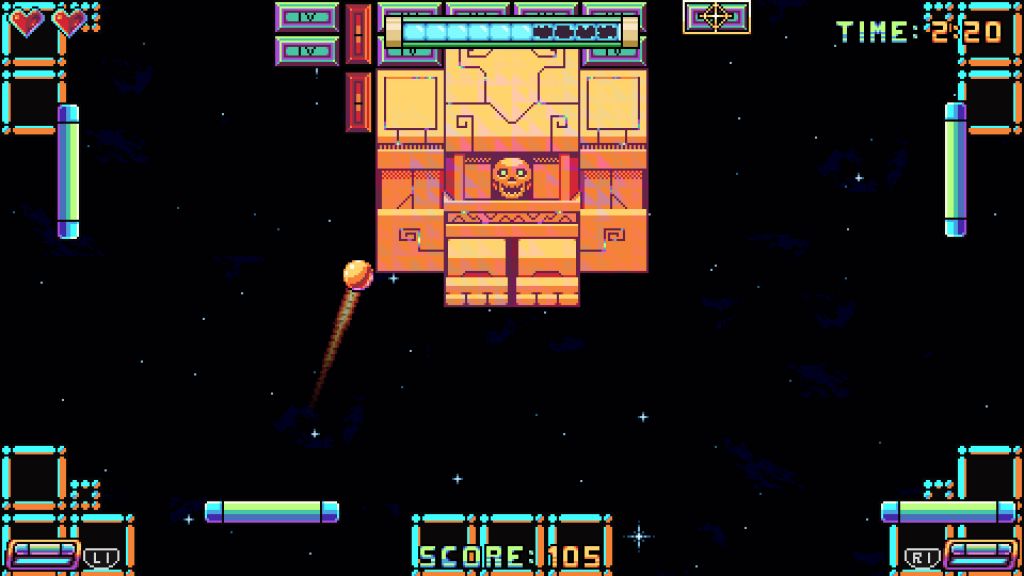 When you encounter difficulties for making a ball bounce where you want it to go, you have an additional tool. You have the possibility of using a kind of “force push”, going from the pad to the direction it is facing. If you press on the L1 or R1 button (depending on the pad from which you want the push to start), you’ll be using this ability. There are no limits on the amount of time you can use it. There is a timeframe though between each usage, which can be seen in the lower corners of the screen (as seen in the image above).

One last gameplay aspect to mention: I usually don’t equate ball breaker games with…boss battles! This one implements it pretty well. Basically, you have a boss, which consists of blocks and sensible sections. You just need to hit those sections a number of times before winning. An example of this can be seen in the image above. 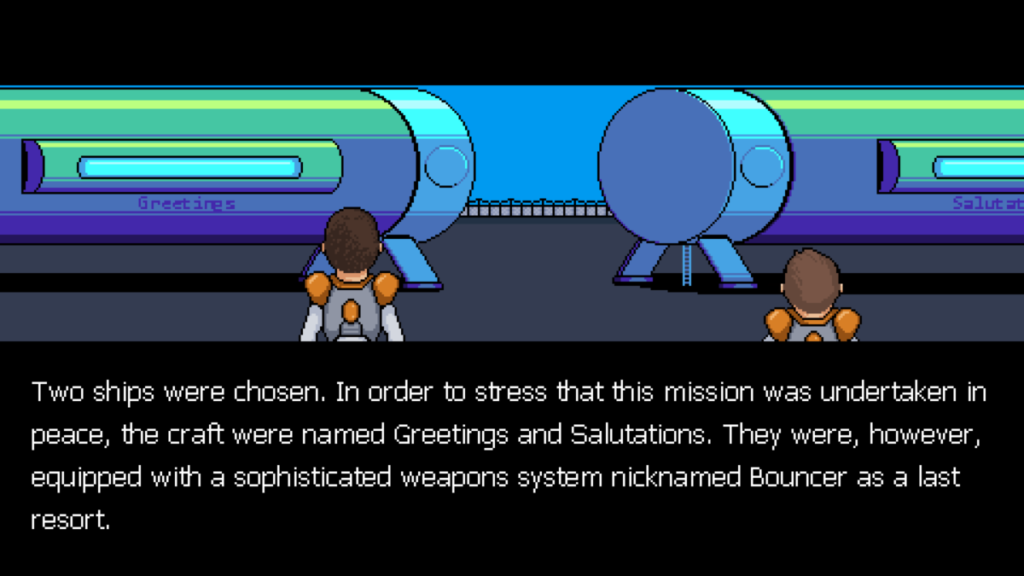 Story mode, for those sci-fi lovers

The “main” gameplay mode for Twin Breaker is a story mode. Instead of having just a context, not to say a pretext, to navigate through each level, there was definitely an effort put in here. I want to give a huge round of applause to Colin Moriarty for creating something that is really deep. There are story beats, special moments and even some inside jokes for CLS fans (like the ships that are called Greetings and Salutations, which are how every episode of Sacred Symbols starts). You can even unlock special lore content if you obtain specific scores. It didn’t grab me a lot though, because I am not a person who really appreciates sci-fi stories. I can still objectively appreciate what is present. 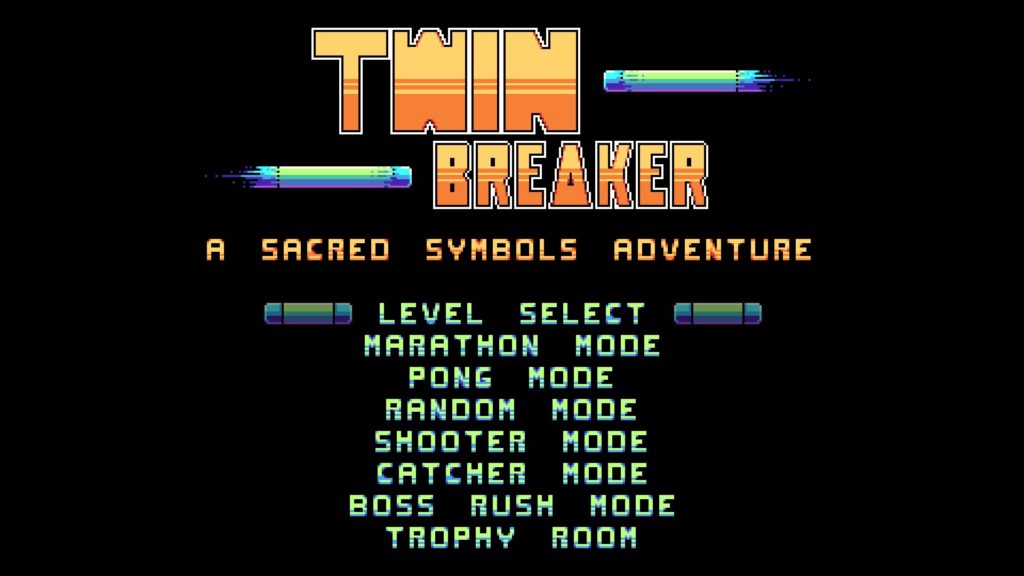 A plethora of game modes

With the story mode accessible through the Level Select option (seen above), there are 6 additional gameplay modes, going from an endless mode (Marathon mode) to a random mode, practicing your laser shooting abilities (Shooter mode) to fighting the boss battles (Boss Rush Mode). The replayability is definitely really high, and you can try to have an S rank on every level, which is absolutely not easy on certain stages. 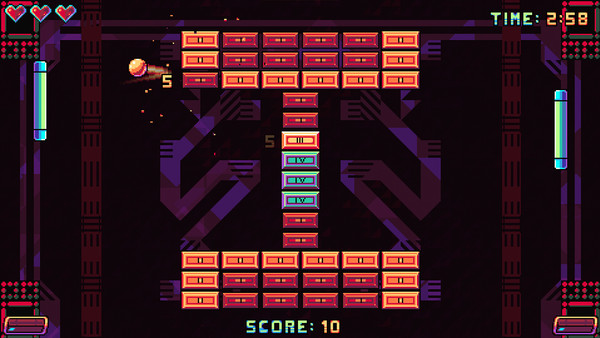 Colin has always publicly been a fan of retro games, Mega Man and Castlevania being in his favorite game franchises. It was not a surprise to me seeing that this game lives up in this retro 8-16 bits environment. The graphical style is very reminiscent of this era. The chiptunes music is also very on-point, going hand-in-hand with the graphics, this represents a lot of passion from the people involved in this project. While not being as remarkable as the graphics in The Messenger, it is still quite effective.

A happy mix of old-school and new-school

It is always a pleasure to see when games come out where old sensibilities are transitioned into a new environment. Seeing a retro-inspired ball breaker game like this one pleases. I hope there will be others like this one. Twin Breaker: A Sacred Symbols Adventure is not expensive and can be finished in a couple of hours. It is a cross-buy title, and each version has its trophy list. While not as memorable as some other of the recent indie games released recently, it is still definitely worth the price of entry.