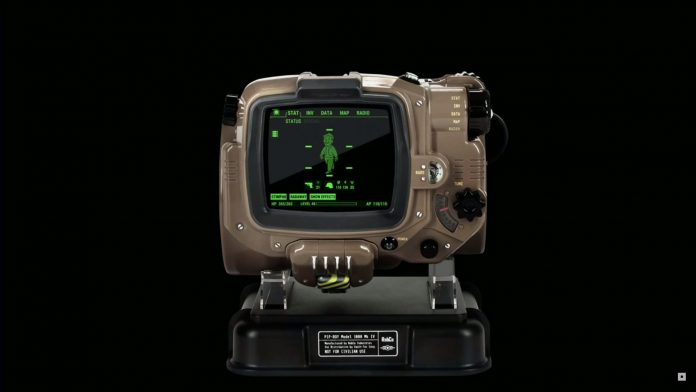 Few things are as iconic as the Pip-Boy in the Fallout universe (except maybe the Pimp-Boy of Fallout Vegas). The handy little device serves as the hub of information for all things Wasteland. Need to check your stats? Manage your quests and inventory? The Pip-Boy’s got you covered.

For the launch of Fallout 4, developers Bethesda have finally given every wanna-be vault dweller what they’ve been asking for: A real-life Pip-Boy. Well, at least an app that looks and behaves exactly like the friendly little device. If you were fortunate enough to snag one of the Pip-Boy Collector’s Editions, you’ll soon be snapping on a sleek wrist band that doubles as a smart-phone case. But enough of how cool that case is (it’s really, really cool). We’re here to talk about the Pip-Boy App!

Now available for Android, Apple, and Windows smartphones, the Pip-Boy app offers the user a “second-screen” experience with Fallout 4. It’s no gimmick, either. Through the app, you’re able to do everything you could do with the Pip-Boy in-game, without having to enter the menu on the main screen.

When you open the app for the first time, you’re prompted to select either a “full-screen” or “hardware” mode, the latter specifically designed to work with the Pip-Boy Collector’s Edition phone case. I appreciate Bethesda’s foresight in creating an optimized version for those who weren’t able to order the CE (the rest of us can always duct tape our phones to our wrists).

After selecting your preference, you’re prompted to select your platform (PC, PS4, or Xbox One), and the Pip-Boy App searches for the appropriate device. Once connection is established, you’re able to tab through your stats, inventory, data, map, and radio – you’re even able to swipe through each subset. You’ll have full details on all your weapons, armor, and of course, your limb conditions. Dropping equipment is a breeze, as is popping Radaways. You want to play the Atomic Command minigame? You’re all set.

Navigation is easy, too. I have large hands and rarely hit something accidentally with the dreaded “fat-finger.” The Pip-Boy App brings the world of Fallout 4 that much closer – even if it’s as close as we ever want to get. If you’re curious about that Pip-Boy phone case that comes with the Collector’s Edition – stay tuned. I’ll be un-boxing one as soon as it arrives.