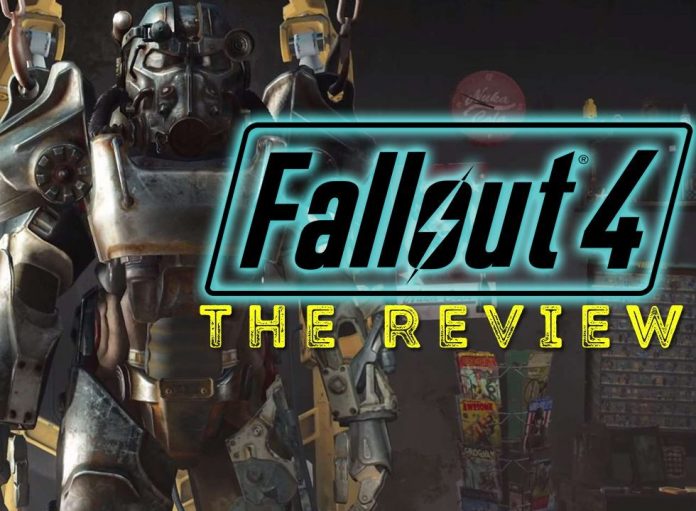 The audience at E3 2015 collectively cheered when game developers Bethesda officially announced Fallout 4. They then cheered louder when it was revealed the game would be released in just a couple months in November 2015. I counted the days as they passed.

I thoroughly enjoyed both Fallout 3, and to a lesser extent Fallout: New Vegas. I spent dozens of hours in the games, exploring locations and dismembering bad guys in VATS. They were good games – great games, even. So when Fallout 4 was announced, I was naturally very excited. With E3’s presentation, we saw new combat, crafting systems, and even buildable settlements. All of these new developments were welcome, but how would they work out in the game? With the arrival of November 10th, I soon found out.

For this review, I’m breaking down Fallout 4‘s merits into several categories: Story, Graphics, Gameplay, Replayability, and Value. I’ve spent about 200+ hours in game, and this review is representative of my experiences. There will be minor spoilers. Story has always been one of the biggest weaknesses of the Fallout series. It’s an unfortunate truth. Fallout 3 and Fallout: New Vegas both had interesting story lines, but I never really felt compelled as the protagonist. With Fallout 4, I found myself actually interested in the storyline and embracing the role of the Lone Wanderer. This could be because of my age or role in life, but I honestly found the protagonist’s search for his/her son as a worthwhile endeavor. I wanted to help this character find his/her long-lost son.

I played as a male character for my playthrough, so I cannot comment on the voice actor for the female Lone Wanderer, but I found the voice actor for the male character very underwhelming. The conversation writing wasn’t that great to begin with (it’s Fallout‘s first time not having a silent protagonist, so I’m taking that into account), but I feel like Brian Delaney‘s work was middling at best. There are some occasions where we see the frustration of a father who lost his son coming through, but there’s so few and far between that when they do occur, we’re wondering if the character stopped taking his chems. Again, Fallout has never had a protagonist actually speaking in the game before, so it’s an honorable first attempt. Hopefully when Mass Effect: Andromeda is released, Bethesda can take some more notes on Bioware’s methods.

Without going into too much detail, in the quest to find your son, you’re confronted by several factions: The Minutemen, The Railroad, The Institute, and The Brotherhood of Steel. Each of these factions has it’s own storyline in relation to Fallout 4‘s endgame. Unfortunately, pretty much all of them suck. The Minutemen are incompetent, The Railroad has no real idea what they’re doing, The Institute is paranoid, and The Brotherhood of Steel are a bunch of tech-loving fascists. There’s no way to broker peace between all of them (something I honestly feel could have been done, except maybe with the Brotherhood). You’re given the option of siding with one or (in some cases) more of these factions, and it’s a tough choice. Indeed, perhaps it is the toughest choice I have made in video games for quite some time. I did also feel real regret and had to come to terms with the effects of that choice in the game, which was not easy. Fallout 4 deserves credit for drawing out those emotions – it’s a feat not many games are able to do.

Aside from the main quest in Fallout 4, there are lots of other opportunities for players to explore not only the geographical expanse of the Wasteland, but the culture of post-apocalyptic Boston. Diamond City is full of Easter Eggs. Holotapes, computer files, and notes abound with details of pre-war life. Even old skeletons have a story to tell. Some of the deepest emotional connections to the game come from this kind of storytelling. The more attention you pay to the little things in Fallout 4, the more the game comes to life.

There’s a wide variety of companions to travel with in Fallout 4. Most of them are great. Nick Valentine, Piper, and Curie are among my favorites. They each have their own quests as well. Curie’s quest in particular is great and raises the question of what it means to be human. If you haven’t done it yet, I highly recommend it. Fallout 4 looks pretty spectacular. Some people may complain about the visuals, but I’ll tell you why they’re wrong: Fallout 4 is an open-world game. You can walk from one end of the map to the other without a load screen. This is difficult to do from a technical point of view. The amount of detail preserved in the graphics is great for such a game. Character models are pretty detailed, as well – especially in cut-scenes. One reason companions are such a great addition to Fallout 4 is the amount of work put into their mannerisms. The slightest detail can make or break a believable character (Codsworth is a great example of this). Fallout 4 delivers on this front.

Environments in Fallout 4 are gorgeous, sometimes terrifyingly so. They’re also varied. Each region of the map has its own distinct flavor – areas aren’t just recycled. The coastline often seems serene, almost peaceful (minus the occasional Mirelurks), while The Glowing Sea appears as harsh and unforgiving as it actually is. Weather patterns are also impressive. Radiation storms are terrifying when you first experience them, and even when it rains I find myself looking for a building in which to shelter. Even the underwater environments are detailed. I’ve spent hours exploring the waters off the east coast of the Commonwealth, and seen some really interesting things. Gameplay in Fallout 4 is, for the most part, top-notch.

Gunplay and targeting VATS feel great. In fact, it feels identical to a streamlined shooter like Call of Duty or Battlefield. This is no small feat either. Bethesda allegedly modeled combat in Fallout 4 after another blockbuster, Destiny. Personally, I’m happy this is the only thing Fallout 4 borrowed from Destiny. Players are able to map items and weapons to quickslots on the D-Pad, which are a nice touch for quickly accessing items without opening the Pip-Boy in combat. Controls are generally spot-on, though interaction with some items (like power armor and companions) could be better streamlined to provide a more smooth experience.

Fallout 4‘s RPG elements were revamped as well, and they do take some getting used to. The system is significantly different from past games in the franchise, but it’s not completely out in left field. Before you play, take a good look at the perk chart and plot out your progress first. It may get a little confusing otherwise.

The gameplay in Fallout 4 shines most when it comes to customization. Players are able to customize their weapons, clothing, and even their power armor. They’re also able to do this for their companions and even settlers in their settlements. This provides great opportunities for the player to take a sense of ownership over their game (they’ll even poke fun at you for some of your choices). It also provides an easy avenue for developers to provide more options down the road for downloadable content. Similarly, settlements and the modular building system in Fallout 4 is phenomenal. I have probably spent nearly 100 hours in game just building and scavenging for building materials. It’s oddly cathartic. I feel like a kid again, playing with a new LEGO kit (you can check out my latest Sanctuary Hills settlement build here). I hope in future DLC, additional building options for settlements, like elevators, are included (I’m sure they will be, given that a large part of the game’s structure is predicated on this ability). If you enjoy games like Minecraft or Terraria, you will appreciate this aspect of Fallout 4.

If I had one major critique of Fallout4, it’s that there is no cooperative gameplay. It’s somewhat frustrating to be able to build fantastic things and mod wonderful weapons, and then have no real way to share your accomplishments. We know Bethesda knows how to make cooperative games, as evidenced by their recent Elder Scrolls Online, so why they didn’t incorporate some aspects of that game in Fallout 4 may be the mystery of this decade.

Some reviews I have read about Fallout 4 cite bugs or glitches as disruptive of their experience. I may be a fortunate player, but I have only encountered one bug during my time in game. It was easily resolved thanks to Fallout 4′s automatic quicksave feature. Compared to other Fallout and Bethesda games, Fallout 4 has been the least-buggy, in my experience. There’s great replayability to be had in Fallout 4. A large part of that is due to the ability of players to customize so much of the Wasteland, whether that is their weapons and armor, or their settlements. You can take things apart and rebuild them. Resources aren’t finite, either – in many places, materials and supplies will respawn if you wait long enough. You’re not confined to just what the game gives you – you can make it your own. This goes for your character as well. You can play as a melee specialist, a heavy weapons specialist, or hey – even find a way not to kill anyone at all. There are many different ways to build your Lone Wanderer, and each has its own consequences in the post-apocalyptic Commonwealth.

Also, because of the four main factions I mentioned earlier and the choices you are forced to make, you could start a new game and make new decisions, which will lead to a significantly different overall experience. With DLC inevitably on the way, players should expect even more replayability, as new DLC will likely bring even more opportunity for player choice. Fallout 4 delivers great bang for the buck. It probably has the best value of any game in the current generation of consoles. This is due in large part to the gameplay and replayability discussed above. Again, I’m nearly 200 hours into my first playthrough. That’s some serious return on a purchase. 12,000 minutes of game time for $60. By comparison, if I wanted to spend that same amount of time at the movies, I’d need to shell out over $1,000. And I could keep playing without spending another dollar.

With an eye towards the future, DLC is on the horizon. Unlike other games on the market (Star Wars: Battlefront‘s Season Pass is $50), Fallout 4‘s Season Pass is only $30. Previous Fallout games delivered pretty great expansions, so we’re expecting to get our money’s worth from Fallout 4‘s DLC. On top of all this, Bethesda has said free mods will soon be supported on both console and PC, bumping your replayability and value even higher.

Fallout 4 met and exceeded my expectations in almost every way. It represents the pinnacle in player involvement for this generation of games, and I’m hopeful more games will follow suit. We’ll individually review DLC as it is released.