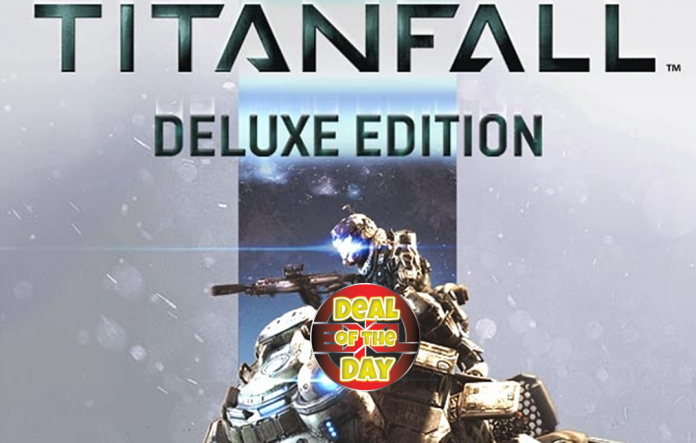 Titanfall has cemented itself into the FPS genre as being one of the most popular and competitive shooters of the past 2 years.

With news of ‘Titanfall 2’ not too far around the corner, if you have not yet had a chance to play the original Titanfall or need to add it back to your library, Xbox Live Gold Members’ can do so for only $5.00 USD.

Includes: Titanfall and Titanfall Season Pass. Join Your Friends in the Fight. Millions of gamers have already heard the words “Prepare for Titanfall” crackle over a radio. They’ve experienced the feeling of dropping a titan from orbit – of hearing the scream of a massive, 20-foot-tall mechanical monstrosity burning through the atmosphere. They’ve fought side-by-side with their titan, running on walls and climbing buildings as their robotic buddy laid waste to enemies. They’ve jumped into the titan to take control, and wreaked havoc on their enemies with rockets, plasma pulses and 40mm rounds. They’ve experienced the future of first-person shooters. And now it’s your turn. Get ready to call down your titan and join the battle. With the Titanfall Deluxe, you’ll have access to even more. This includes the Season Pass, with three content packs worth of exciting new maps to stomp your enemies in.

Fluid, Fast-Paced Combat – Your Pilot in Titanfall is more capable than the average soldier. You can run on walls and leap between buildings, diving around corners and tumbling through the air. It’s freeing, and you’ll have a hard time going back to other shooters after feeling so powerful and unencumbered.

Massive Titans – Titans aren’t just tanks. They aren’t guardians or suits of armor. They’re more than all of that. You can have one follow you around and lay down suppressing fire, or you can jump into the cockpit and blast away your enemies from within the thick metal shell. You can outfit titans with different armaments, too, making them as customizable as your soldier.

An Innovative Campaign – Titanfall takes a bold step by blending traditional narrative with competitive multiplayer, with huge set pieces, characters and story elements all with in thrilling multiplayer modes. You’re still fighting vicious enemies… but those enemies are players, too.

For more details head over to the Xbox Marketplace.