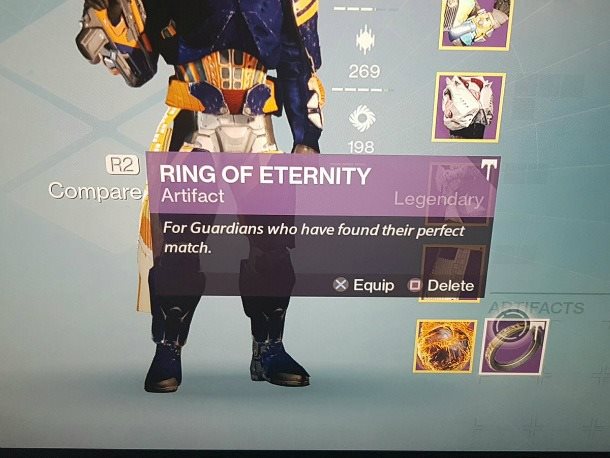 Who doesn’t like a good, soppy, romantic love story? Call me an old romantic, but tales of love and romance really hit me where I live and when there’s a video game slant on it, well that’s just even more beautiful. Especially when you consider that generally us gamers are still seen by the outside world as a bunch of loners who rarely leave the sanctity of their gaming lair.  The icing on the cake here is the involvement of Bungie through Destiny in which this marriage proposal took place.

This love story revolves around 2 plucky games developers – Rami Ismail (from Vlambeer) and Adriel Wallick (one of the organizers of the Train Jam game development event) and their story was shared on Rami’s Twitter account.

Included in the proposal was some cute additions that Bungie helped to make a reality, including an in-game love letter from Adriel to Rami, a Proposal Emote and finally a special artifact called the “Ring of Eternity” which is described as “For Guardians who have found their perfect match.” 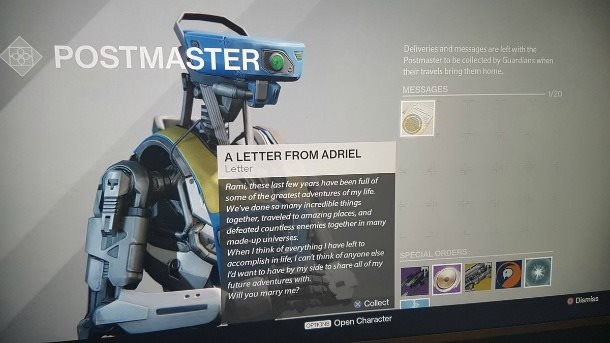 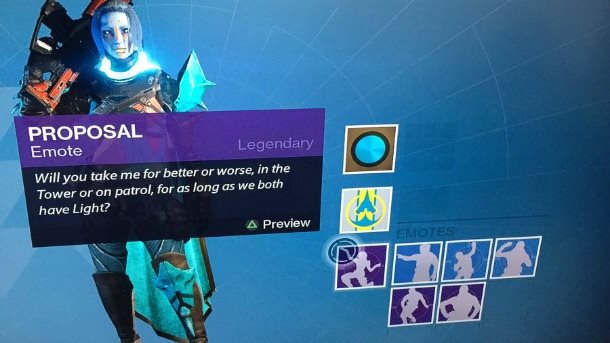 What? No they’re not tears in my eyes, I just think someone is slicing onions in here…

There have been some amazing video game romances and friendships formed over the years – there are literally people on this planet who, were it not for some video games, be here today. The great thing about video game friendships and romances are that you can and will get to meet so many people that you would never have even known existed where it not for the industry in which we find ourselves engrossed in.

Video game relationships can and have translated into real life numerous times before and will continue to do so for as long as there are games to be played online. Video games don’t just make normal relationships better, they can make long-distance relationships blossom more than you could possibly imagine, these relationships can truly scale mountain ranges and cross the oceans, they bring people from opposite sides of the world together and in this video game world we live in, where there is so much negativity and trolling, so many spiteful and bitter comments, so much fanboyism and one-upmanship – to see a love story like this restores a fair bit of faith in the humanity of us gamers.

Tell us your tales of gaming love! We’d love to hear from you about your own tales of love and romance in the video game area! Just let us know in the comments below, the RGM Forums or on Twitter.