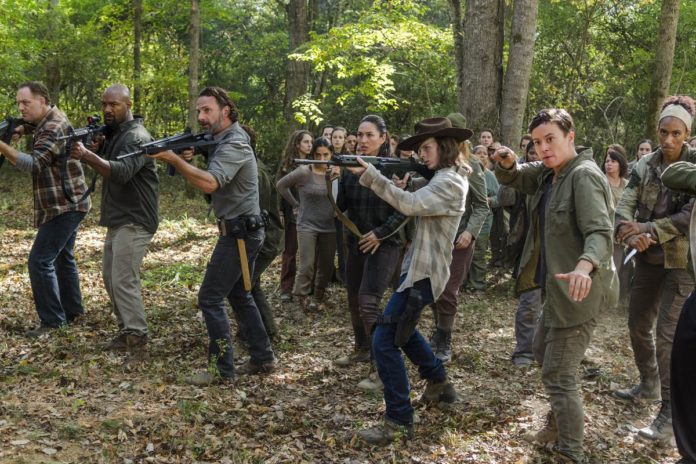 In the penultimate episode of season seven, we see the final pieces fall into place for the inevitable brawl. The Saviours versus everyone else, essentially (for the most part). Something They Need is certainly a very compelling episode for several reasons. Occasionally it trips over itself but nothing that makes the episode any less intriguing. The episode looks at three-story branches; Hilltop, The Sanctuary and Oceanside.

At Hilltop there’s treachery afoot. We see Maggie working hard with the other settlers to cultivate crops and grow food. Whilst doing so, leader Gregory is inspecting all that is going on. When Maggie leaves to go plant a tree on the other side of the walls Gregory, surprisingly, follows her. Under a flimsy facade of wanting to chat, Gregory has a sinister motive. He is shown to be carrying a knife, the implication that he is going to kill her. He seems to struggle with this as Maggie continues to plant her tree, unawares of the conflict raging inside Gregory. Before he can act, a Walker emerges to save the day.

Gregory approaches the Walker, but has seemingly never taken one out before and bottles it. Maggie helps him out and takes out the Walker ahead of him, whilst this is going on Gregory is accosted by another. Close to death Maggie seems to struggle for a much longer time than she has in recent memory with a Walker. She eventually kills the Walker that has Gregory pinned. As they recover some more settlers from Hilltop are walking past and Maggie kindly explains the situation, seemingly embarrassing Gregory. 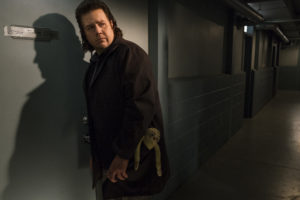 Meanwhile over at The Sanctuary we learn the fate of Sasha after she went in all guns blazing. She is currently in Daryl’s old cell, no light and just her thoughts. As the scene starts we see one of the creepier Saviors trying to rape her. Before he can try anything Negan comes in sees what is going on. As always, Jeffrey Dean Morgan is a delight and calls the Savior on what he is doing (rape is agains “the code”). Before the other guy can say anything Negan thrusts a knife through his neck. An interesting back and forth between Negan and Sasha occurs before he leaves her with his knife and the freshly dead Savior. In the discussion Negan surmises that Sasha either wants to live and join him or die and let the imminent Walker take her out, or kill herself with the knife.

When he returns he sees the knife protruding out of the Saviors head. Sasha agrees to join him. We see flecks of Eugene throughout the time at The Sanctuary as he tries to explain why he turned his back on Alexandria. Sasha asks Eugene for his help to kill herself, she doesn’t want to be used against Rick and the others. She wants to die before that can happen. Eugene, eventually, agrees to help her and provides her with the poison he made a few episodes back. The response in Sasha’s facial expression led me to believe that she was hoping for a weapon that she could perhaps try to use on Negan. Though that is speculation.

Finally we see what Rick and the team are up to again. There quest for guns continues and Tara is leading them to Oceanside, despite her promise to Cyndie that she wouldn’t. Needs must and all that. What happens is a pretty cool sequence where the Alexandrians prepare to storm Oceanside whilst Tara tries to talk Natania into joining the fight against the Saviors. Unfortunately, she will not do so, despite the threat of Oceanside being taken. So Oceanside gets taken, more or less without a hitch, but the explosions that Rick and co. rigged brought in Walker attention. A fight against the Walkers ensues with Oceanside fighting with Alexandria, albeit briefly.

Despite some of the Oceansiders wanting to join the fight Natania will not, despite Rick taking all of the guns. Cyndie explains to Tara that some want to fight but it must be everyone or no one. For what reason, we do not know. Seems a little odd, can’t see why these people don’t have their own freewill, but anyways. Rick and the Alexandrians leave with heap of guns for the Scavengers in preparation for the fight. 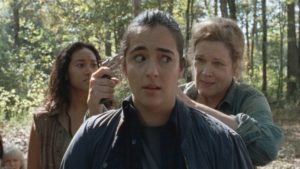 The episode ends with two fairly exciting twists. Firstly, Negan has heard about stuff that Rick is up to. We don’t know to what detail, but Negan says he is going to pay them a visit. Presumably it was Gregory as he was seen leaving Hilltop in a truck with one of the residents. Secondly, when Rick and everyone else returns to Alexandria, Rosita is there to greet them. She takes them to the prison they have to show them someone who has appeared. It’s Dwight, back from his break from reality. Apparently he was the one who came to Rosita’s aid at the end of the last episode. Dwight explains that he wants to help. After calming Daryl down, Rick gets Dwight to get on his knees, whilst he points his handgun at him.

Something They Need was a strong episode that brought a lot to the table. There are several new conflicts that have arisen out of this episode and surely not everything will be resolved before the end of the last episode of this season, obviously. My main questions are: does Dwight really want to help? Who in the hell told Negan about what Rick is up to? and will Oceanside hold the grudge when they get their weapons back? Only time will tell. The season finale is imminent.