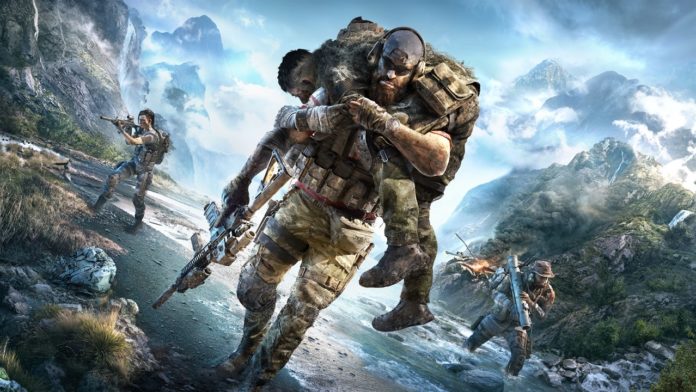 — A copy of the game was provided, courtesy of Ubisoft —

Tom Clancy’s Ghost Recon has been a franchise that I’ve dabbled in through a couple of the previous iterations, but not much more. Wildlands just didn’t click for me. Future Soldier was a game I really appreciated. As for the Advanced Warfighter games, I found the difficulty back then a bit out of my range, but I respected the game a lot. When a new Tom Clancy’s Ghost Recon title was announced, I thought about the previous titles I had played and thought I’d give this one a chance. Not only did Tom Clancy’s Ghost Recon‘s story intrigued me, but it also had a real badass villain. Did I appreciate the experience? For the most part, yes, but let me tell you the details. 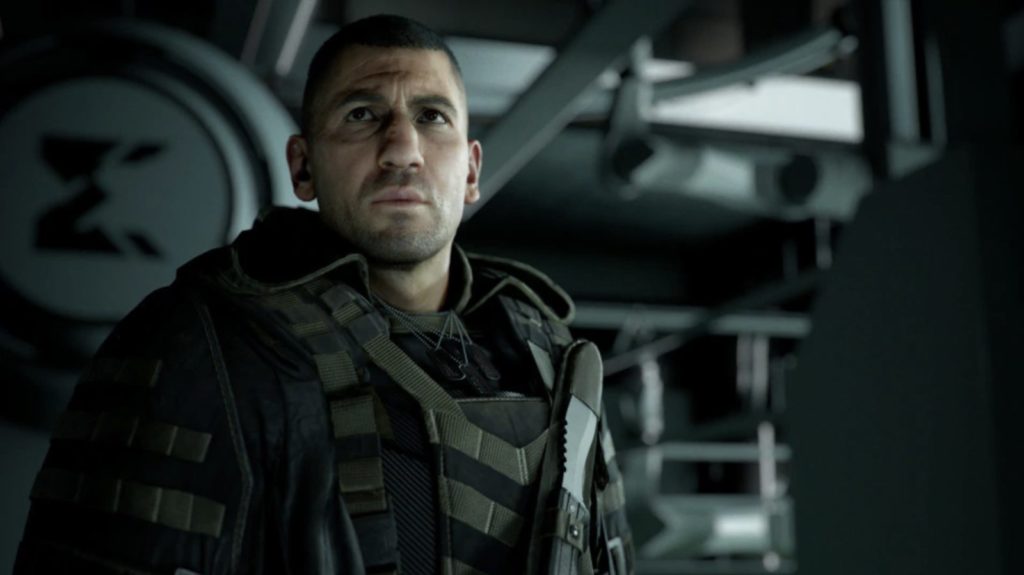 The story of the game takes place a couple of years after the event of Tom Clancy’s Ghost Recon: Wildlands. Near the archipelago of Auroa (located in the South Pacific region of the world), a US cargo ship called the USS Seay sank near its shores. The US government didn’t appreciate it at all, especially regarding the fact that this location is known to be owned by a billionaire linked to the drone and artificial intelligence industries. As a response to this event, you play as a member of a special operation to investigate what happened. You play as a member of this unit: Lieutenant Colonel Anthony Perryman, also known as “Nomad”. 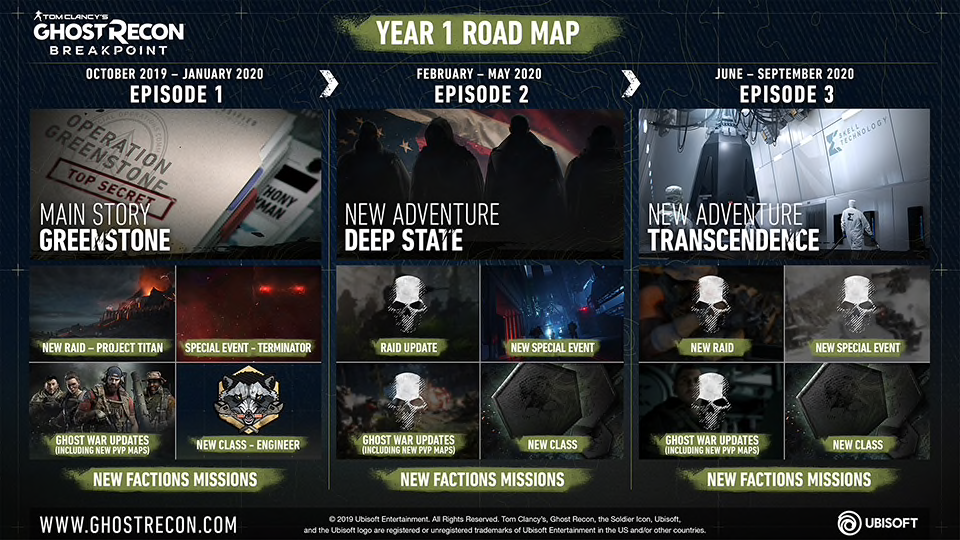 Tom Clancy’s games and “games as a service”

Except for some cinematic trailers with the main protagonist, It was pretty much a media blackout on the game. Consequently, it was a huge surprise to me that this game was a game as a service, like Destiny. My expectations for this iteration then changed completely. It was also surprising that Ubisoft would release another ambitious game as a service title a couple of months earlier: Tom Clancy’s The Division 2. This one didn’t keep my level of interest high: the environment and the story was boring to me. In contrast, Tom Clancy’s Ghost Recon Breakpoint‘s plot really intrigued me, and I love Jon Bernthal (The Punisher, The Walking Dead). Those drove me to play the game, and complete 100% of the story.

Playing a live online game changed my planning in terms of the number of hours I’ll need to play the game to finish it. I thought it would probably take me around 15-20 hours to finish, which was the minimum length of the previous game. The story took me around 50 hours to fully complete. I was never bored with it, which was awesome as I felt I got an in depth experience. Some missions discouraged me though – more on that later.

It inherited from the good aspects of a game as a service though: constant support and updates. I had a love hate relation with the game. At one point, I had to put it down for some time, then go back to it. At first, the game had a lot of problems: clipping/popping issues (I even disappeared once through a water puddle), mission glitches, LONG loading times, etc. The story piqued my interest, but those problems, added with some mission structure that I hated, made me stop for some time. When I returned, I saw the huge overall improvements: better loading time, smoother menu navigation, … basically a much better experience. The game struck a chord with me at that point, allowing me to play it to the end. 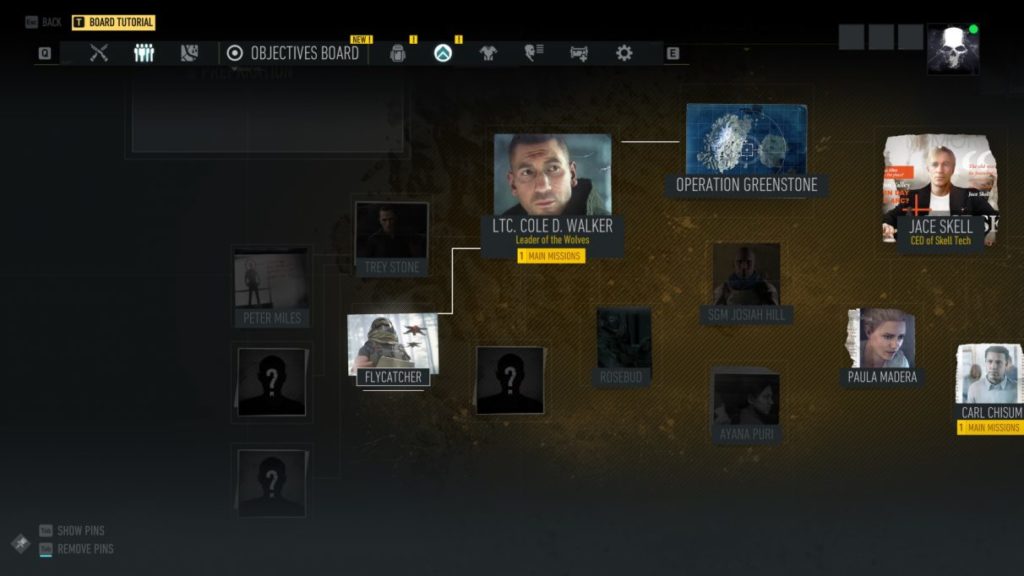 A little “Breath of the Wild” in my shooter

There is something special in the missions structure that I’ve seen only once, and it’s in the latest The Legend of Zelda game: after merely around an hour or 2 maximum, you can try the last mission. You might quite a crazy challenge though. I did it only after completing the story, and even then, I had problems finishing it. So, those with shooter abilities that I don’t have, good for you. 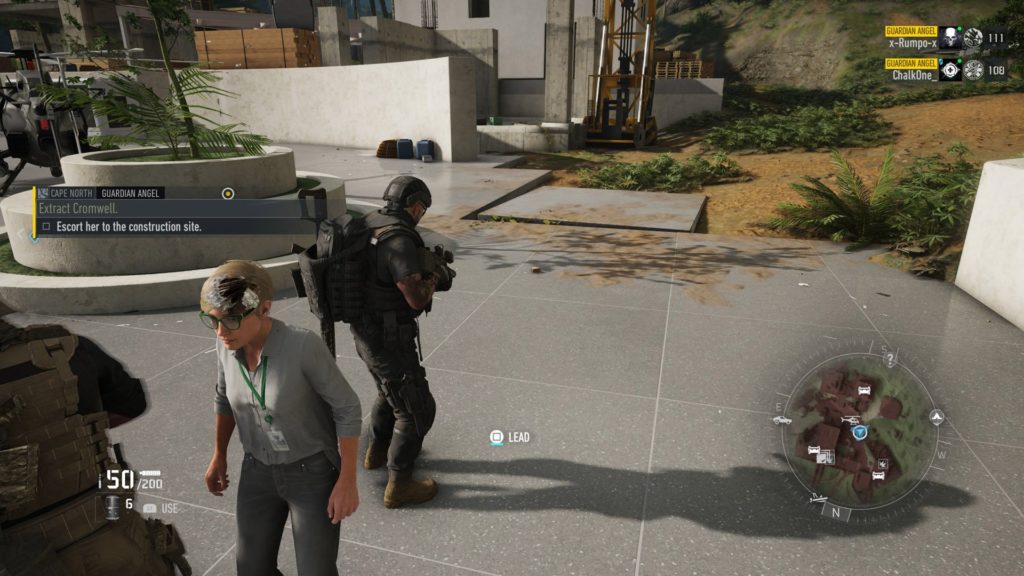 When the action is intense, the game can be quite exhilarating. In some missions, you can drive vehicles, kill enemies, destroy drones and helicopters, and snipe obstacles, and the game mechanics feels natural. The explosions and sound effects emphasize everything that is happening around you. Often, I was happy to play with headphones on to appreciate all of that.

The respawn code could use some work though. On a number of occasions you can appear 300 to 600 meters (sometimes even more) from the location where you died, which can be painful during some missions. The worst situation was when I had to find a person in a highly dangerous location, and escort him out of there. If you don’t do it without dying, you will respawn outside of the location forcing you to replay a chunk of the mission. All of the enemies would be back and the only consolation is knowing where the person is located. Some missions definitely expected players to play cooperatively. I played the entire campaign solo. I felt proud to be able to complete the game this way, but it was much harder than it should have been. 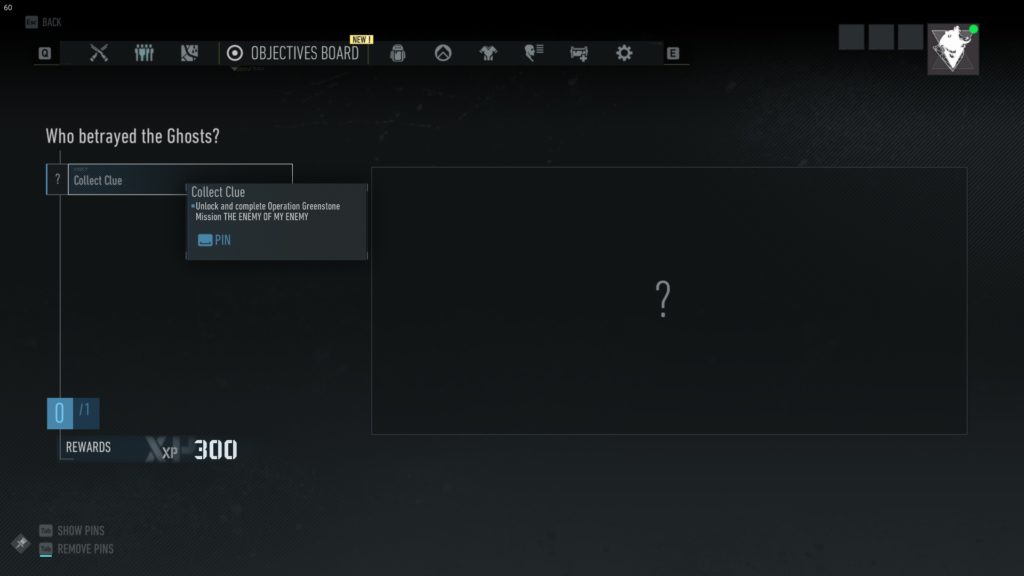 Rewards aplenty for investigation and exploration

The game does not just use the dialogues and cinematic scenes to advance the story. The objectives board gives you access to an investigation option, which highlights some mysteries all along the adventure. To answer those, there is a mission to do: find some collectibles in the world, complete a mission (as seen above), etc. Once you do, you get answers to those questions. It makes the world alive and thought through, and gives a little investigative vibe to the game. I really enjoyed that aspect. The rewards from doing this go from XP to adding lore to the world. It also helps to obtain what you need to customize your weapons, which will be described next. 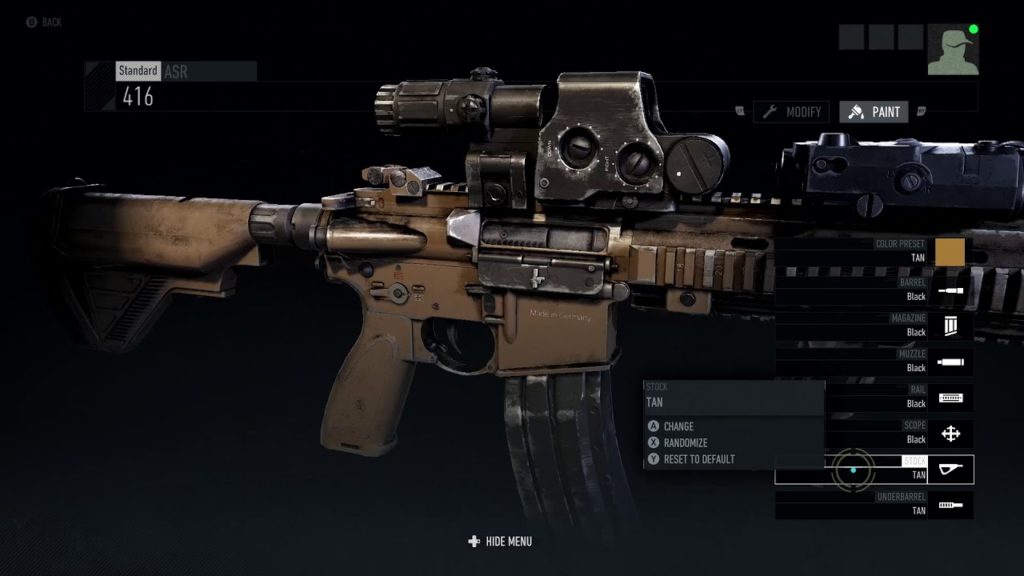 Tom Clancy’s Recon Breakpoint excels in providing you many ways to get better gear. Like every looter shooter, you get tons of different weapons just by killing enemies and opening crates (which serves as a kind of treasure chest). The player can also heavily customize the weapons you obtain. You obtain parts by discovering them during your playthrough. You find blueprints of weapon parts, which gives you more objects to purchase at your base’s store. Weapon upgrades are an additional way to get more powerful. By obtaining resources, you can then reach your gunsmith from one of your menu options and do apply the upgrades you want to perform. You rarely find yourself in a situation where your inventory lacks variety, which I appreciated a lot. 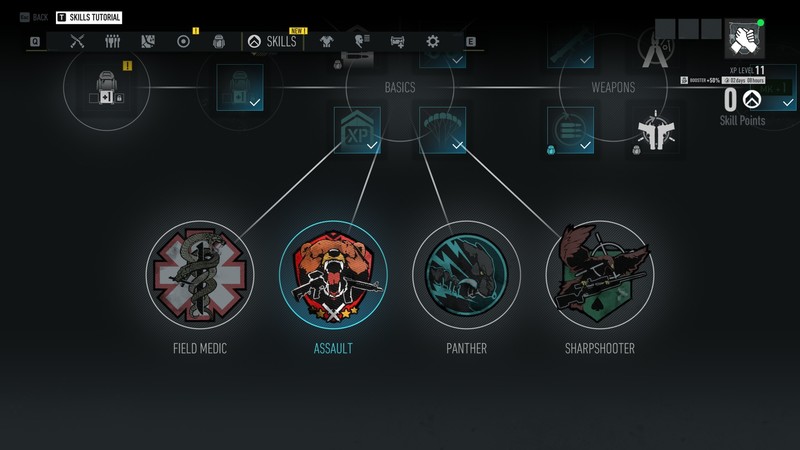 The RPG mechanics comprised in this game deepen the connection you can have with your character. You start by assigning one of the 4 classes (seen above) as a starting point to your evolution. Each possesses special buffs and perks. Afterward, a skill tree can be progressively unlocked, giving even more powerful abilities and characteristics to your character. The number of possibilities is crazy and can affect greatly how you play the game. 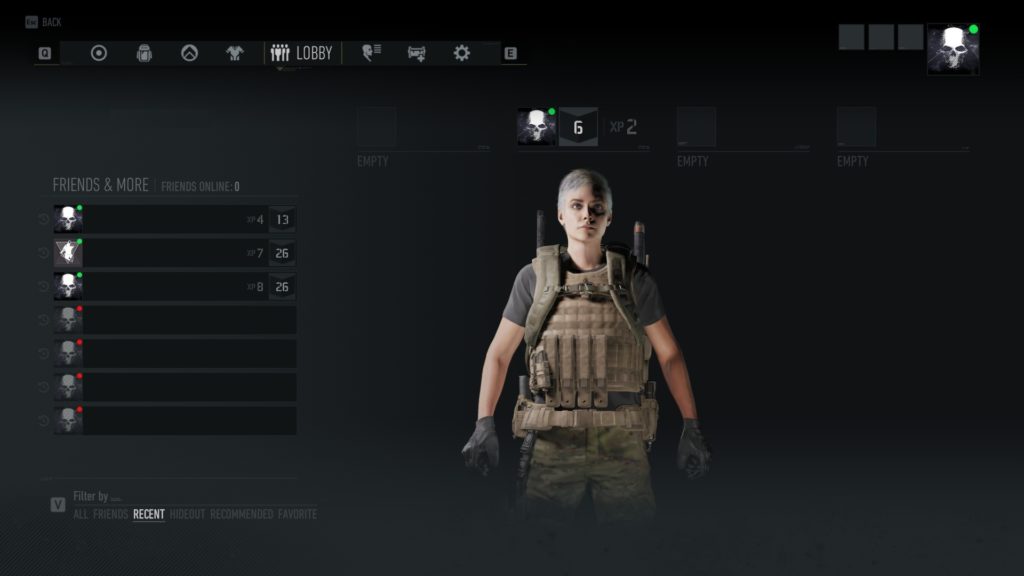 As I mentioned before, in terms of multiplayer options, the campaign can be enjoyed cooperatively, with a team of up to 4 players. The competitive multiplayer components of the game are also important, appearing seamlessly on the world map. Two different types of tactical 4v4 are also available. Not unlike other games as a service, special missions (like events, raids, etc.) can be tackled by players that want extra challenges or who finished the campaign. Tons of side quests also populate the game world.

The content will keep on coming: 3 extra episodes will come for free in the first year. There are constant updates made to the game. The development team also unveiled a roadmap of objectives it has for the title in the near future.

Worthy of your time

In conclusion, in the state the game is right now, I honestly think that this game is worth playing. Since its launch, many of the big problems reported by players are ironed out (or are being worked on as we speak). The story will keep you interested all along. The mix of not-so-distant future technology with grounded performances by the cast makes a compelling package. Even though it’s not in the best games of the categories, it is definitely worth checking out. With the amount of content, you’ll have a great value for your dollars, especially with the occasional sales going around since its launch.