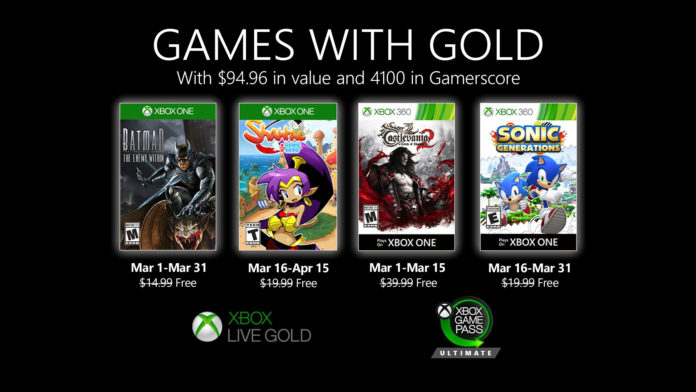 The end of the month is coming and players might not have collected February’s Games with Gold. Those games included Call of Cthulhu and Fable Heroes. Yesterday Xbox announced March’s Games with Gold lineup. It really isn’t the worst set of games we have in our libraries.

Starting next month players will be able to pick up these four games.

Players won’t be able to play these games if they don’t have an Xbox Live Gold account. Players who DO have Xbox Live Gold will be able to install all titles free of charge (apart form the data it takes to install them). Most of my family doesn’t even realize they get these games each month. Even after I explained to them how great the service can be. With Xbox Game Pass, players have a better library of games to play rather than hoping each month will bring four good games. With the addition of games Kingdom Hearts 3, Yakuza 0, and Wastleland Remastered, it seems like more time and energy is being put into the Xbox Game Pass than the Games with Gold.

I really wouldn’t even mind if Games with Gold ended when the Xbox Series X was released. We’ve had a great run with this program. It doesn’t help that players will also be getting the Smart Delivery system in the new Xbox Series X. Players won’t have to constantly buy new versions of games in the future.

Also, did you see the player that was banned from playing any EA game? We just passed through the middle of the week and we are getting some great news. Bookmark www.realgamemedia.com so you won’t lose track of all this news.